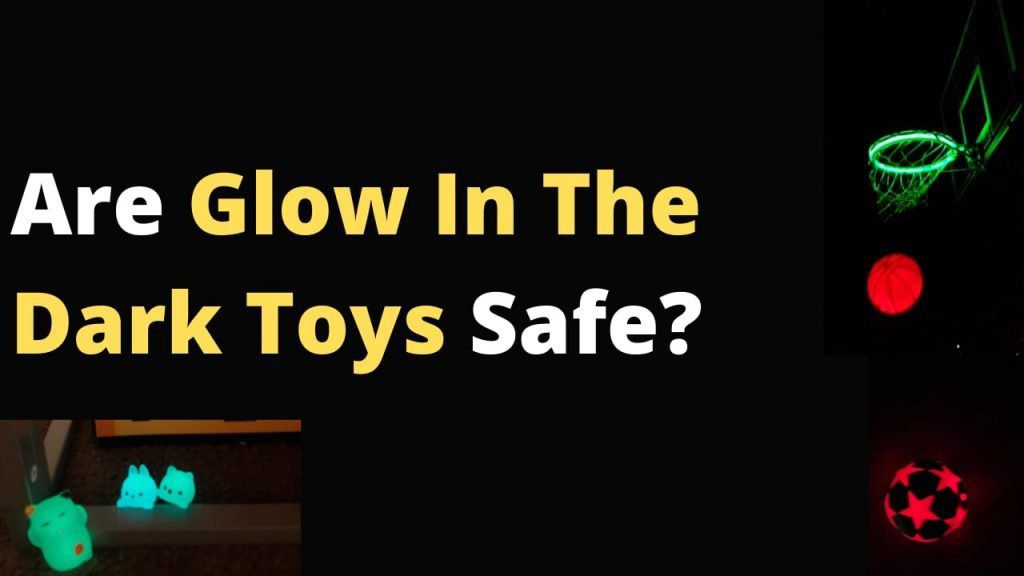 Are you planning to buy a glow in the dark toy for your kid but concerned about their safety? Well, don’t worry they are safe to use, but read on to know when they aren’t.

Glow in the dark toys are great for children of all ages, from toddlers to teens, as they are both fun and useful. With the help of these kinds of toys, you can console your little ones in the dark.

Additionally, you can make simple stocking stuffers from these toys and use them at night parties for decoration just like glow balloons. Basically glow the dark toys are simple, colorful, and incredible toys that children love playing with.

They are different types of glow toys available in the market. There is glow in dark balls- basketball, soccer, golf, glow in the dark outdoor toys such as flying disk, glow in the dark tent, and many other amazing options.

These toys work similarly to regular toys, with the only difference being they glow in the dark. They are simple to use and dazzle brightly when the light is turned off.

So, investing in them wouldn’t be a bad choice as they are safe to use. However, before we discuss their safety, let us figure out what they are made of?

What Are Glow Toys Made Of? 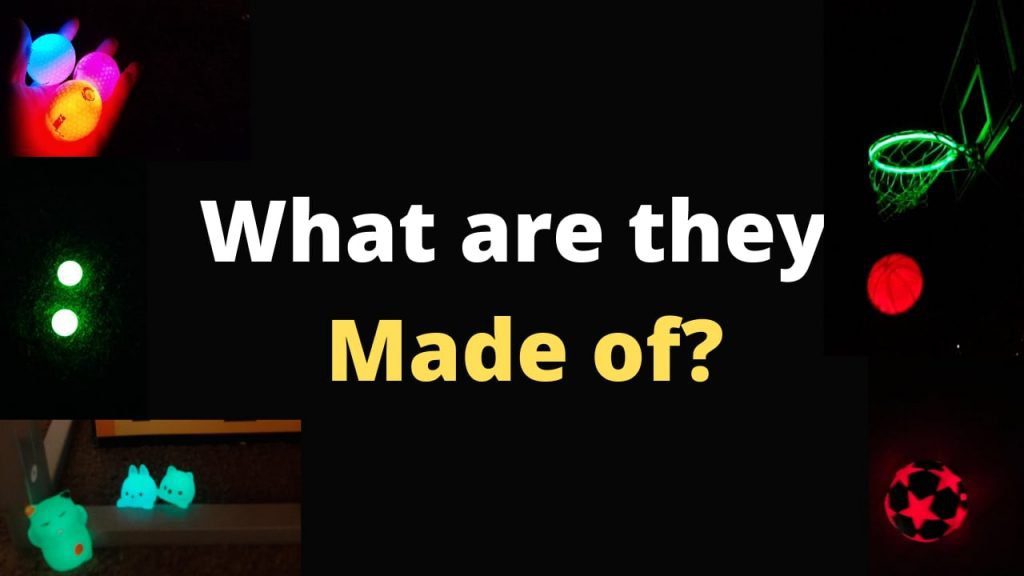 All glow in the dark stuff is usually manufactured from a substance called phosphorus, and the same goes for glow in the dark toys. The glow that you get from your toys in the form of emission of light is due to a phenomenon called photoluminescence.

Phosphorus comes with three characteristics that make them a good choice for glow stuff- First, a kind of energy that needs to be energized; second, visible-light color, which they produce and third, persistence, which allows them to glow for some time.

To create a glow toy, you need phosphorus that can be energized by normal light and comes with a pretty strong application. Zinc sulfide and strontium aluminate are the two most common types of phosphorus pigments used to manufacture glow in the dark toys.

The phosphorus is simply mixed with the plastic and molded according to the shape of the desired toy to create a glow in the dark toys. When you expose the glowing toy to a source of light, be it natural or artificial, it recharges itself by absorbing the light.

A glow in the dark toy gleams for several hours, usually in green color. It is best when you are not using your glow toys; you can place them under a source of light so that they can be recharged on their own.

Nowadays, most people prefer strontium aluminate over zinc sulfide to manufacture glow in the dark toys because of its unique properties.

Are Glow In The Dark Toys Safe To Use? 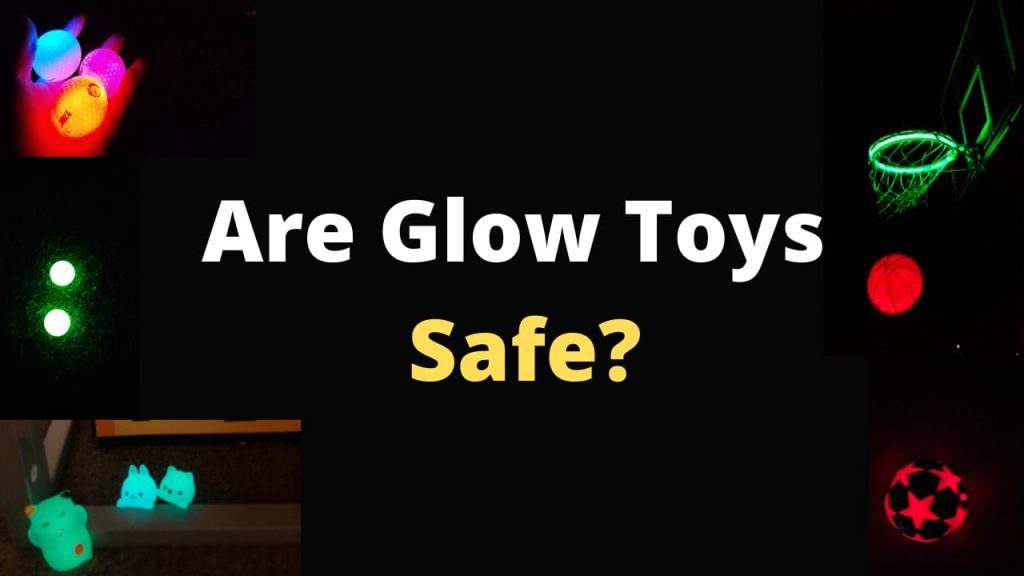 Safety is an essential factor to consider when buying something for all people around the globe. When you are planning to buy glow in the dark toys, you should definitely check if it is safe to use or not.

Further, little kids have a tendency to put everything they get their hands on in their mouth, and therefore, you would want a toy that will not harm their health.

Almost all glow in the dark toys is made from non-hazardous materials, which makes them safe to use. They are manufactured from materials that are basically non-toxic, non-radioactive, latex-free, BPA and PVC free.

Moreover, these toys are made by mixing phosphorus with other substances, so kids do not get in direct contact with the phosphorus element, and thus they are protected from its harmful effects if any.

All the products which are manufactured using phosphorus are generally considered safe as it is a non-radioactive substance. However, still, it is best if you enquire from the seller or check the product description regarding the safe use of glow in the dark toys.

You can also go through online reviews or feedback prior to purchase to get detailed ideas about glow toys from people who have already used them.

Both substances glow in the dark in a similar way, but there is a very significant difference between them. Phosphorus is a non-toxic substance, safe to use, and available for sale, while radium is considered radioactive and not accessible to the public.

Basically, you require experience and a special permit or license to handle radium.

How Does Glow In The Dark Toys Work?

All glow in the dark toys is manufactured or created using phosphorus. It is a non-toxic substance that comes with the capability to store and reflect light. In a dark area or environment, it starts to emit light perceivable in the form of a bright glow.

To get glow persistently, you need to recharge the toy by placing it under a source of light for some time. Basically, you need to expose it to light if you want it to work for a long time.

Usually, a glow in the dark toy will emit light for several hours before it needs to be charged again. This process is similar to photosynthesis.

Can You Differentiate Between The Glow Coming From Radium And Phosphorus?

Phosphorus, as already said, absorbs and reserves light for re-emission. The glow you get from phosphorus lasts from three to ten hours prior to putting the toy under the source of light again.

This substance usually comes in the form of powder and can be used safely. On the other side, radium is a dangerous radioactive substance. It glows on its own without the help of anything.

The light radium radiates lasts for years until the substance eventually wears off. Radium is typically kept in glass tubes.

Hopefully, by now, you must have understood that glow in the dark toys is basically safe to use for kids of all ages. They do not contain harmful substances that can take a toll on your child’s health. These toys are basically made from strontium aluminate, a type of phosphors that is safe for use. So, without any worry, you can buy these toys for your children. Playing with glow toys will make your children extremely happy and reduce their fear of darkness.