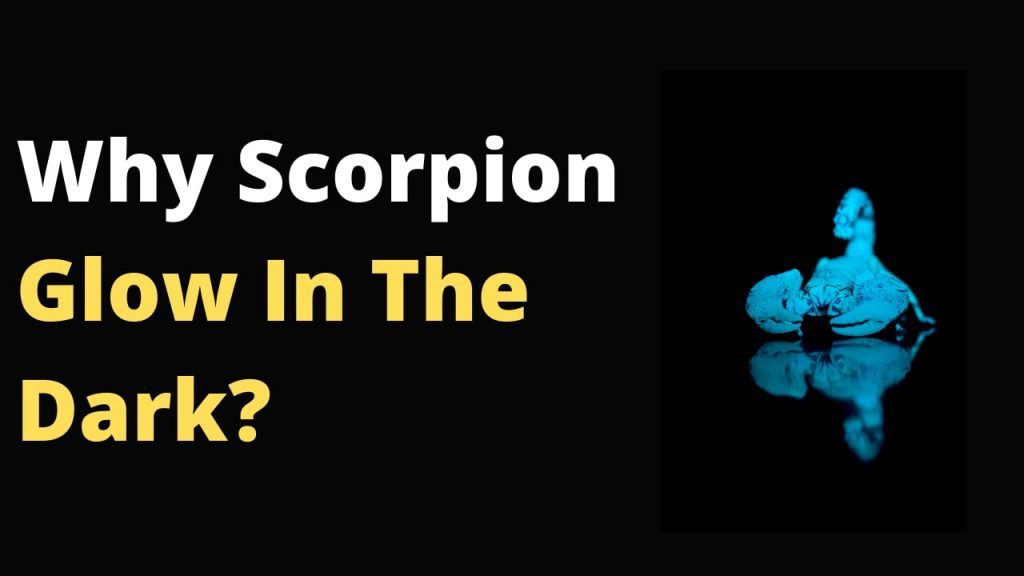 Have you ever seen a scorpion in the dark? Did you notice they are glowing in a bright blush green color under the starlight? Are you wondering what causes scorpions to glow in the dark? Well, then you are at the right spot.

Scorpions are deadly and lethal creatures that have amazing traits. Not only are they stinging arachnids, but they can survive even the harshest of climates. They live 25 years longer than cockroaches and survive up to 48 hours without oxygen.

These dangerous creatures can eat anything to survive that is even other scorpions. Lastly, scorpions glow in an incredible light at night. The reason behind scorpion glowing is actually mysterious as no one hasn’t been able to find a logical explanation.

However, it is something strong, as when a scorpion is conserved in the alcohol, the alcohol itself glows. Some people suggest that the glow of scorpion is accidental because of some chemicals, while few believe it’s actually to lure their prey.

But neither of the two reasons have ever been tested.

Why Do Scorpions Glow In The Dark? All scorpions are said to glow under ultraviolet light such as moonlight or blacklight. They glow in a blue-green through a substance found in their hyaline layer, an extremely thin but tough coating on the scorpion’s exoskeleton referred to as cuticle.

This substance reacts to the UV light and glows brightly for a relatively long time. Further, the hyaline layer is extremely sturdy and survives for millions of years.

Many scientists have found out that after a scorpion sheds its shell, it doesn’t shine until the shell basically hardens again. According to Dr.Scott A Stockwell, a scorpion expert, this means the matter that causes the shine is a result of the hardening process.

Basically, the hyaline layers of the scorpion absorb the long wavelength of ultraviolet light and radiate it back in various wavelengths that can be seen at night as the green-blue gleam.

Some other scientists have figured out different reasons for their glow. Douglas Gaffin from the University of Oklahoma offers a fascinating theory.

He is of the opinion that scorpions gleam to transform the soft light from the stars and moon into the color which they are able to see best- blue or green.

This can explain why the scorpion eye is so subtle that they can even detect the slightest starlight glow from the background of the night sky. The scorpions amplify those soft signals by converting their whole body into light collectors.

Gaffin further suggests that the reason for this could be to find hiding spots. By sensing light, the scorpions can easily find spots where they can hide. Anything that emits shade upon the scorpion skin could lower their glow and become a potential hiding spot.

Gaffin further believes that the scorpion’s entire body, from the tail to the pincers, stores UV light and turns it into green-blue wavelengths. These signals can also be passed to the brain through a cluster of nerves, which are laid out on the animal’s entire body.

If this is possible, it signifies that a scorpion gleam can increase the surface area around its eye by a thousand times, which further indicates that the entire scorpion could be one whole eye.

Though Gaffin has conducted some research that proves this idea, there is no solid evidence, and some more in-depth study needs to be done.

It is possible that these two compounds help these little creatures to absorb and store light for reflecting it back in the night.

Why Do Scorpions Need To Glow In The Dark? The next question is, why do the scorpions need to glow in the dark? What can be the reason for this lethal creature to glow? Although the scientists have not found a consecutive reason behind their glow.

But still, they are trying to solve this mystery. Some common reasons behind the glow of the scorpions are as follows. The scorpions make use of their exoskeletons to find UV light as they want to avoid it.

They are night hunters and will probably want to find the darkest place to hide during the day. Plus, they also glow to confuse their prey or attract them to hunt them down.

Additionally, the glow is beneficial for humans, too, as it makes scorpions easier to spot in the dark. Well, these are some reasons behind the scorpion glow though there are still some doubts over their authenticity.

Are Scorpions Able To See In The Dark?

Scorpions are terrifying creatures that can scare everyone. They are basically arachnids like a spider with eight legs and two eyes on top and two to five on each side. But even with so many eyes, they are not able to see very well.

The scorpions, however, are able to identify movement and light from the dark. Lastly, the subtlety of their eye is the highest among all the arthropods.

How To Get Rid Of Scorpions?

The answer to this question is yes; the scorpion body does collect UV light and transforms it into blue-green wavelengths. These signals can also be passed into the brain through nerves that are spread throughout the body of a scorpion.

If this is true, then the whole scorpion glow can boost the surface area of its eye, and the entire scorpion would be one big eye.

Hopefully, by now, you must have understood how the scorpion glows at night and for what reasons. Though there are still some questions regarding their authenticity, the given reasons are still pretty valid as they have been stated by known scientists and researchers. We can conclude by saying that scorpions glow in the dark as they contain two specific fluorescent substances.